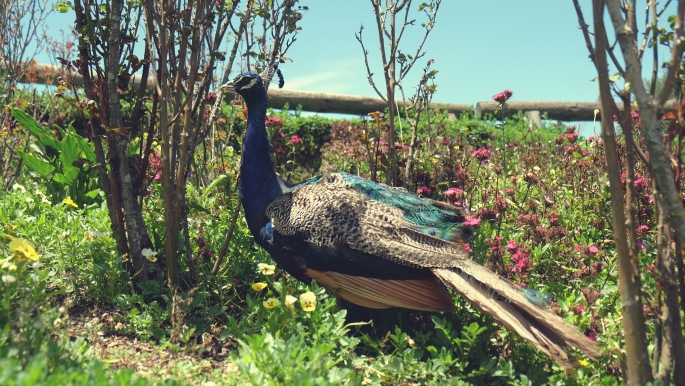 ​I found a peacock last year, as I walked around Hacienda Collpa near Cajamarca, Peru. He was wandering around the garden outside a small chapel, which seemed mostly for decoration. The tour guide, who walked us around the Hacienda or ranch the entire afternoon, eventually let us roam free after leading us to a chapel. There were two rows of manicured lawns with cactus, small statues and plants bordering the edges as if to restrict them from anyone ruining the garden.

We were surrounded by mountains, forested areas, and an artificial lake decorated by small bridges and tiny houses.

At the ranch they mostly raised cows for the production of milk, cheese, condescend milk and other derivatives. They are also famous for its named cows that are able to answer to their names. (There was a demonstration where the ranchers were calling the cows by name, one by one, as they walked to their stables, but I was sad to see that if they did not respond they were whipped.) There was one named Esperanza who was my sister’s favorite. It looked the saddest out of the bunch. “She is much older and has seen a lot,” my sister said. I was angered that one of the ranchers was wearing a “Red Skin” jacket. He himself was indigenous, which I found paradoxical. It’s possible that no one told him that Red Skin is considered a racial slur often used to show contempt for Native Americans. 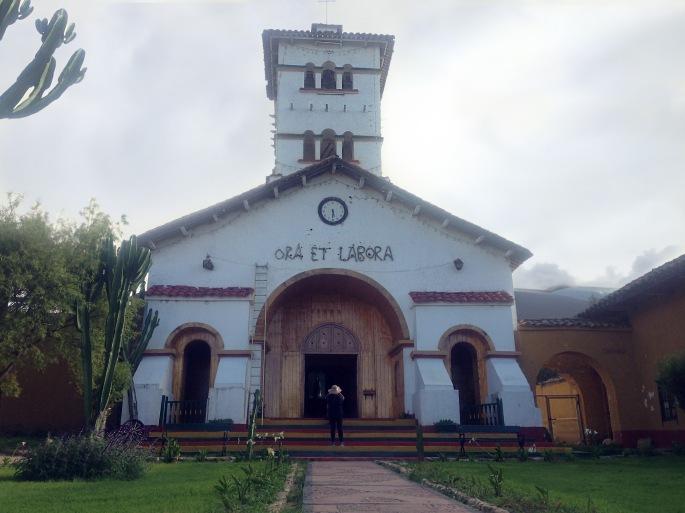 People always get excited about old churches and chapels, but that day I decided not to peek inside. There was a clock a top the door, which seemed painted on, but upon close inspection, I realized it was a real clock with numbers, though it appeared not to be telling the time, since the hands weren’t moving. Below there was an inscription: “ORA ET LABORA,” which is Latin for “pray and work.” The tour guide had mentioned that many of the workers were Christians. By now, I could hear comments from people exiting the chapel about what they had seen inside.

On the side of the chapel there was a shaggy, neglected area near a dry fountain where a peacock pranced around without much direction until I saw it. He seemed to be ignoring the commotion around until he realized he was being watched. He became anxious and walked a little quicker. It didn’t help that some lady said, “It’s a pavo real,” meaning peacock.

I was waiting for the peacock’s tail to spring up, but it never did. I figured with no peahens or females around he wouldn’t want to. The tail wasn’t lengthy enough to drag on the floor, so I assumed it was hidden under the outer wings. It’s normal for younger peacocks not to have fully developed ornamental tails. It’s elongated neck was a vibrant blue, fading into a sea green, whereas the females have neutral, subtle colors, and don’t have the ornamental feathers that spreads out like a fan.

Indian Peafowl, which this peacock closely resembled, are native to South Asia, but over the centuries humans have introduced these birds to different parts of the world, including South American where it seems they can easily adjust to the conditions of the Peruvian countryside. While peafowl exist in the wild, it’s an old custom to keep peacocks in gardens as ornaments, as it was usually done in castles and large estates.

I always wonder how peacocks manage to survive. Carrying a giant tail makes them an easy target for larger predators, but I also think it’s unlikely anyone is tempted to eat a bird mostly made up of 60% feathers. Peahens on the other hand can easily become pray. But it helps that they hang out in groups more frequently than the males who are loners; there’s usually one male with a harem of peahens.

Surprisingly, peahens and peacocks can fly to the safety of low branches. They may not be able to fly far, but at least they can escape. They also mostly eat ground animals and some crops. In older societies peacocks sometimes served the functional purpose of keeping gardens free of snakes. 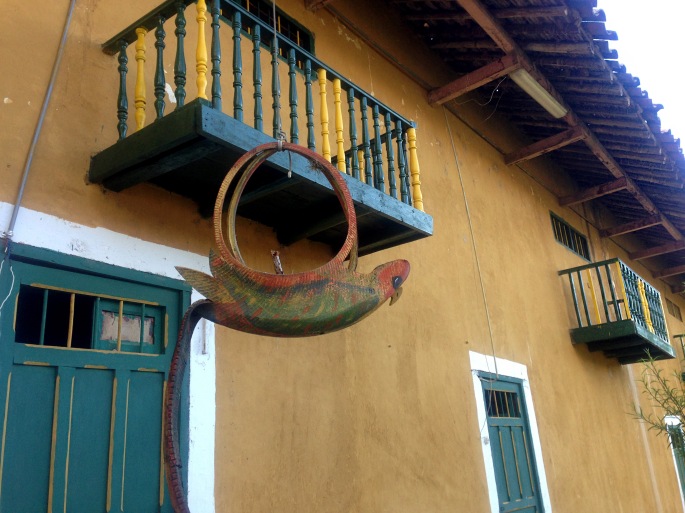 Peacocks evolved in such a way that males use their ornate trains in courtship display, raising the feathers into a fan and making them quiver to catch a female’s attention. A well maintained tail is an indicator of a suitable body condition, which points to mating success. Scientists argue that this trait can be accurately explained through natural selection and not simply sexual selection, since females don’t just select males based on their plumage. The selection may also be influenced by other factors. The peacock’s feisty behavior, loud call and its ornamental train have been formed by natural selection. Its plumage serves as a warning coloration to intimidate predators and rivals. This characteristic is often seen in frogs and snakes.

There is a magic quality to peacocks with their vibrant plumage and ornamental fan display, like rare gems with emerald greens, dark blues and shimmery browns. It’s no surprise peacocks are symbolic to many cultures. As the national bird of India, it has been depicted in art, poetry, mythology, and folk music. It’s also a symbol of royalty, often found in throne engravings. The Buddha Amitabha, the Buddha of Infinite Light has peacocks adorning his throne. Peacocks have also been used in early Christian paintings and mosaics. In Buddhism the peacock represents wisdom, and the feathers are used in many rituals and ornamentations. When I was little, I remember hearing that peacocks drank poison so others wouldn’t have to get sick, and as a result had such magical and vibrant plumage.